So after years of hearing about the NAMM show (National Association of Music Merchants) in the Anaheim CA convention center. I finally went. The Miles Schon Band was booked and I initially thought I’d skip the convention and just show up for the gig.

I got so excited hearing about the convention from other musicians though I ended up going three full days! What a kick for a gear head like me. Tons and tons and tons of cool new equipment coming out in 2014. I really don’t need anything new but thats never stopped me from buying new gear before 🙂

The bands performance went great and I’m already looking forward to next year!

All the best to everyone, 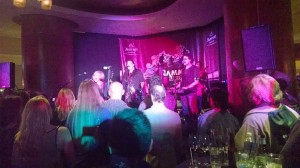 Wil is a professional singer and musician based in Los Angeles. Originally from the State of Colorado he now performs across the country. Both solo and with bands.